An ascending triangle is a bullish chart pattern and is formed by a series of higher lows and an upper resistance level.

It is defined by two lines:

While two bottoms belonging to the same trendline would suffice for pattern recognition, it is more favorable when there are more.

As price rallies, it finds resistance and begins to erase some of its gains.

The subsequent fall in price is shorter than the previous fall and this manifests the series of higher lows.

If a line is drawn above and below the pattern, the top line will appear straight while the bottom will slope upwards at an angle. 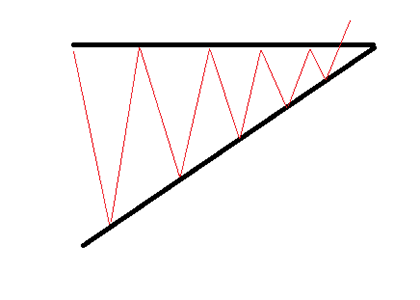 The above image describes perfect conditions for the Ascending Triangle formation. However, it’s a rare occasion to find a perfect triangle, so in most, cases both trend line and resistance line will be pierced by false breakouts. The resistance line can be also slightly inclined.

The higher lows indicate more buyers are gradually entering the market and buying pressure increases as price consolidates moving further towards the apex.

Price is consolidating with a bullish bias so traders should watch out for an impending breakout up through the resistance level.

If price can break through the resistance level, that level will now act as a support level

The breakout can occur based on technical analysis and/or be caused by news flow so it is worthwhile to also consider the fundamentals and market sentiment when using this pattern.

Watch out for fakeouts (false breakouts) carefully as they might be easily confused with the true ones when, in fact, the price is going to retreat back into the triangle.

An ascending triangle is classified as a continuation chart pattern.

Continuation patterns are expected to lead to the continuation of an existing trend.

While the ascending triangle is considered a bullish continuation pattern, exceptions are quite possible.?It’s not infrequent to see it develop in downtrend conditions.

If formed in the downtrend, the ascending triangle is more likely to act as a reversal pattern.

Breakouts can also happen in both directions. Statistically, upward breakouts are more likely to occur, but downward ones seem to be more reliable.

The majority of breakouts of either direction are observed in the second half of the pattern formation distance.

Comdoll traders gather ’round! Today we’re checking out AUD/USD’s uptrend and a possible trend continuation play on EUR/CAD. Don’t even think of missing these setups, yo!

I’m seeing a lot of consolidation for bitcoin and its peers lately. Better keep tabs on these breakout levels on the short-term charts!

Bitcoin and Altcoins Price Analysis: Back in Consolidation

Altcoins are pausing from their trends these days, creating triangle patterns on their short-term charts while waiting for the next set of catalysts.

You can't make an omelet without breaking eggs.Origin Unknown